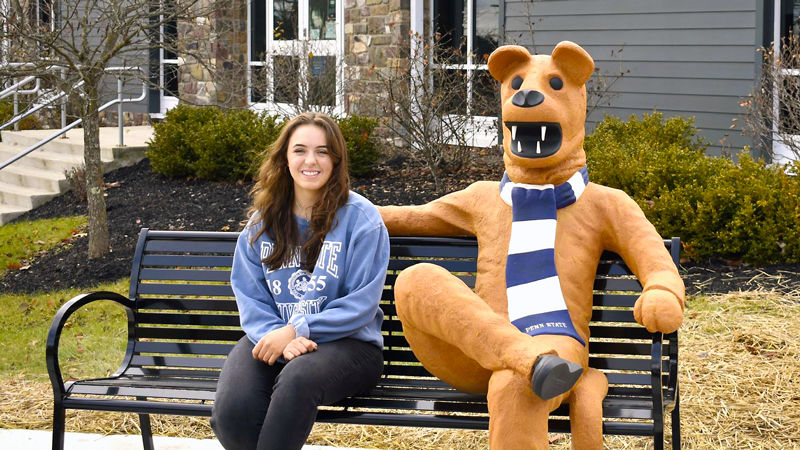 Cloe Mazzatosta is no stranger to getting involved in clubs on campus. She is a participant in six different organizations at Penn State Wilkes-Barre and serves as treasurer for four of them. She also found the local campus to be a great way for her to transition between a smaller high school and a large university.
By: Goldie Van Horn
At a smaller campus like Penn State Wilkes-Barre, there are many opportunities to get involved

Cloe Mazzatosta is no stranger to getting involved in clubs on campus. She is a participant in six different organizations at Penn State Wilkes-Barre and serves as treasurer for four of them.

Mazzatosta is a second-year student majoring in computer science as part of Penn State’s 2+2 Plan. A resident of Plains, she is a graduate of Holy Redeemer High School.

“When I was looking into colleges, my sister was heavily influencing me to consider Penn State Wilkes-Barre,” Cloe Mazzatosta said. “I decided to take her word for it and I definitely don’t regret that decision.”

She found the local campus to be a great way for her to transition between a smaller high school and a large university.

“I’ve gone to a small school my entire life, throughout grade school and high school. Going to University Park right away would have been a huge jump and very overwhelming,” she said.“But going to Penn State Wilkes-Barre made me feel like I was used to in the classroom with smaller classes. Every semester I’ve genuinely enjoyed my classes and all my professors.”

Since many classes and activities were held online during her first year of college due to the pandemic, Mazzatosta got involved in clubs during this academic year. She learned more about the groups through her friends, who were officers in those organizations.

She is a member and treasurer of 4 Seasons Club, JAM (Just Amazing Musicians), the Blue and White Society and the STEAM Club. She is also a member of the Radio Club and a senator for the Student Government Association.

She works on club business during her free time and breaks between classes and estimates she is on campus for at least five to six hours every day between classes, clubs and activities. She also works part-time at Hollister.

Mazzatosta said participating in clubs is a great way to meet and connect with other students.

“It really helps you meet new people and get some good experiences with people, including teachers,” she said. “This year, I’ve gone paintballing, on a hike, to concerts and more. It’s a good experience to be with people I’m going to school with in a different environment. Doing something we all like doing together allows us to get to know each other better.”

Like her sister, Mazzatosta fell in love with Penn State. She was thrilled when she won Penn State Wilkes-Barre’s Instagram contest, making her the first person to sit on the campus’ new Nittany Lion bench.

“That was really exciting to me. I’ve gone to other campuses and seen the lion bench and am happy we have it at our campus now,” she said. “It meant a lot to me to be the first to sit on the bench. My sister and my dad both went to Penn State Wilkes-Barre for a few semesters and my whole family loves Penn State. Getting to be a part of something so big meant a lot, not just to me but to my family.”

When she transitions to University Park next semester, Mazzatosta will be prepared and ready to continue showing her Penn State pride.

“I will already know a bunch of people who are going from my time at Penn State Wilkes-Barre. And I will continue to be involved and get involved in other clubs, too,” she said.