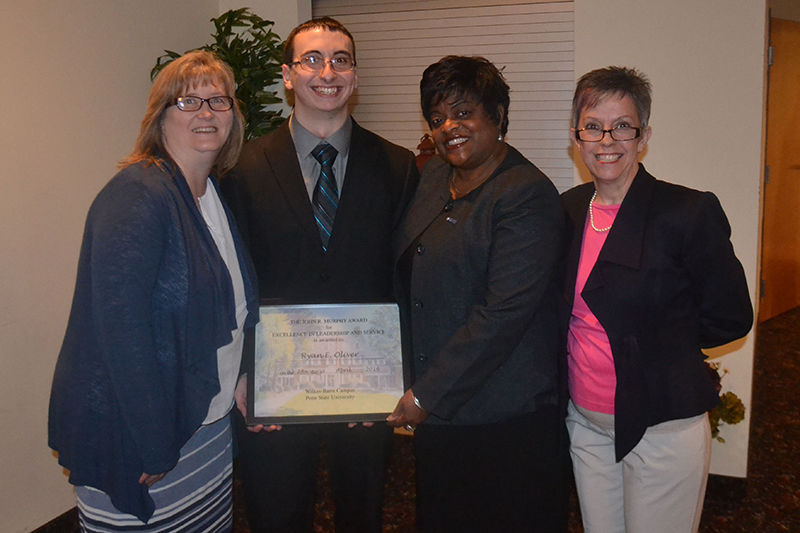 The 2015-16 John R. Murphy Award for Excellence in Leadership & Service was awarded to graduating senior Ryan Oliver from Nanticoke. Rick Barry, a former Penn State Wilkes-Barre student and Walker Award recipient, made this endowed award possible to honor former Director of Student Affairs John R. Murphy, who served Penn State Wilkes-Barre from 1967 to 2004. The award was established to recognize a graduating senior whose outstanding qualities of leadership, service, scholarship, citizenship and character have been directed into programs and service on campus and/or the community that have positively influenced fellow students and contributed to the prestige and well-being of the Wilkes-Barre campus and the reputation of the University as a whole. Oliver has served as both a senator and treasurer of Student Government Association. He was also a member of THON, the Business Club and chair of the Café Committee. For the past year, Oliver has served as an undergraduate research assistant to an engineering faculty member and is a graduate of Intercollegiate Leadership Wilkes-Barre. Oliver graduated in May with a bachelor of science degree in business administration. 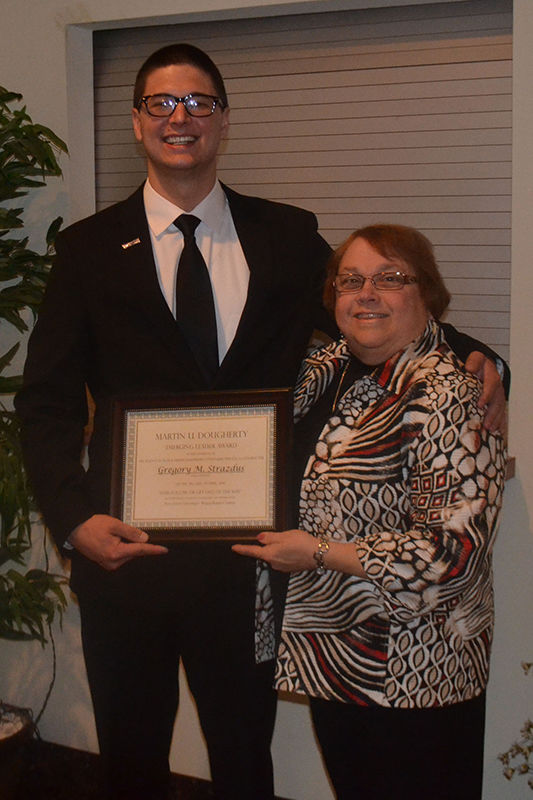 The 2015-16 Martin U. Dougherty Emerging Leader Award was awarded to Dallas native Gregory Strazdus. The Dougherty family established this award in remembrance of their husband/father, Martin, who served on the Penn State Wilkes-Barre Campus Advisory Board. Martin’s firm, the Architectural & Engineering Group Inc., designed the Carriage Room in the campus’ Student Commons, which won the 2003 “Pride of Place” Award from the Greater Wilkes-Barre Chamber of Commerce. This award recognizes a student of junior status who has at least a 3.0 cumulative GPA and has demonstrated excellence in scholarship, leadership, citizenship, service and character. Strazdus is an information science and technology major who serves as the campus’ student government president. Strazdus has been a volunteer, representing the campus and university at community events in the Back Mountain and surrounding area. He has also served on student discussion panels and focus groups sharing student interests and concerns. 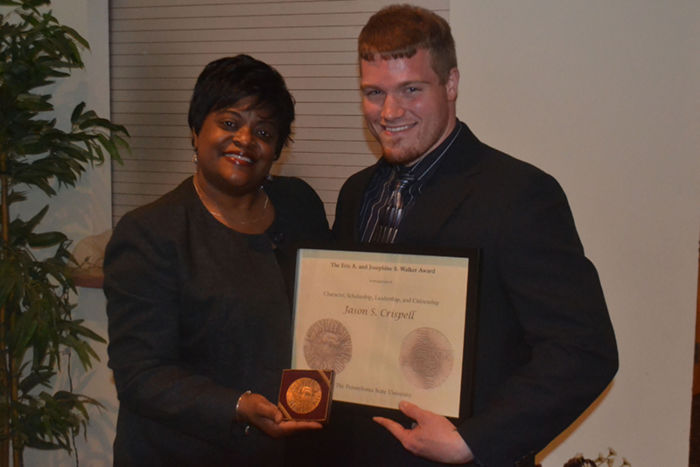 The 2015-16 Eric A. & Josephine Walker Award was awarded to Jason Crispell from Trucksville. The purpose of this award is to recognize the Commonwealth Campus student whose outstanding qualities of character, scholarship, leadership and citizenship have been directed into programs and services that have positively influenced fellow students and have contributed to the prestige and well-being of their campus and, hence, to the reputation of the University as a whole. The award is made annually, at or near the end of the spring term, to a full-time undergraduate student. Crispell has served as president of the campus Fitness Club, vice president of the Blue & White Society, is a graduate of Intercollegiate Leadership Wilkes-Barre and is an Eagle Scout. In addition, Crispell has been a member of the Student Activities Fee Committee, helping to make decisions on how student funds should be spent. Crispell graduated in May with a bachelor of science degree in administration of justice.