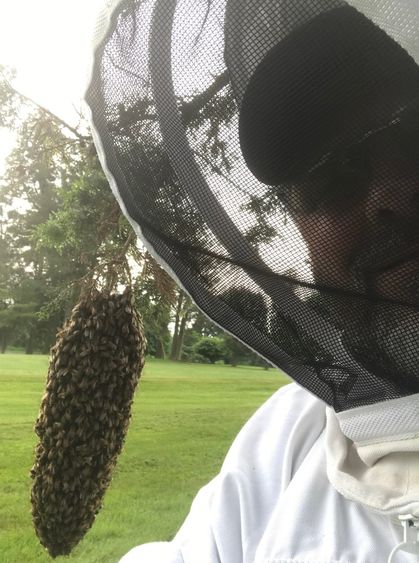 Russell Johnson displays the swarm of bees he relocated from the Penn State Wilkes-Barre campus.

It might be summer, but campus is still “abuzz” with activity – this time of the flying kind. After a swarm of bees was discovered at Penn State Wilkes-Barre, the cluster was safely relocated a few miles away.

Technical Services employee Ron Gruver discovered the swarm near Hayfield House while cutting grass and alerted Director of Business Services Sean McHale. McHale reached out to the campus Sustainability Council and was connected with Russell Johnson, a hobbyist beekeeper and brother of Sandra Race, administrative assistant to the chief academic officer and office of academic affairs.

“We did not want to treat the swarm with chemicals, but wanted to see it prosper somewhere else,” McHale said.

Johnson has been working with bees for about seven years and quickly responded to the call. He estimated that the swarm at Penn State Wilkes-Barre contained about 6,000 to 8,000 honey bees, which he described as a typical swarm containing a queen bee and thousands of worker bees.

He was able to relocate the bees to his home in Jackson Township, about 6 miles from campus.

“When worker bees leave a hive to look for nectar and pollen to make honey, they will fly up to 3 miles, so it’s important to move them at least 3 miles from where they had the original hive,” Johnson explained.

Honey bees are critical to the food chain and ecological community, helping pollinate numerous crops and plants. According to the Planet Bee Foundation, they are used to pollinate more than 100 crops grown in North America, contributing $15 billion annually to the U.S. economy. The foundation also notes that many crops rely on honey bees for more than 90% of their pollination.

“Honey bees are in danger from pesticides, herbicides and disease. They are so important to pollination and the well-being of humans and we need to take care of them,” Johnson said.

McHale said he was happy the swarm was able to be successfully relocated.

“The bees will be able to make honey in the fall from their new home on his property,” he noted. “I was excited how the campus responded with the Sustainability Council and the role each member played to safely remove the bees from campus and allow them to continue their honey-making activities.”

Johnson said he gives away much of the honey his bees produce, which he gathers around October.

“I get some really nice dark honey in the fall that people really enjoy,” he said. “Local honey has natural pollens and can help build our immune systems.”