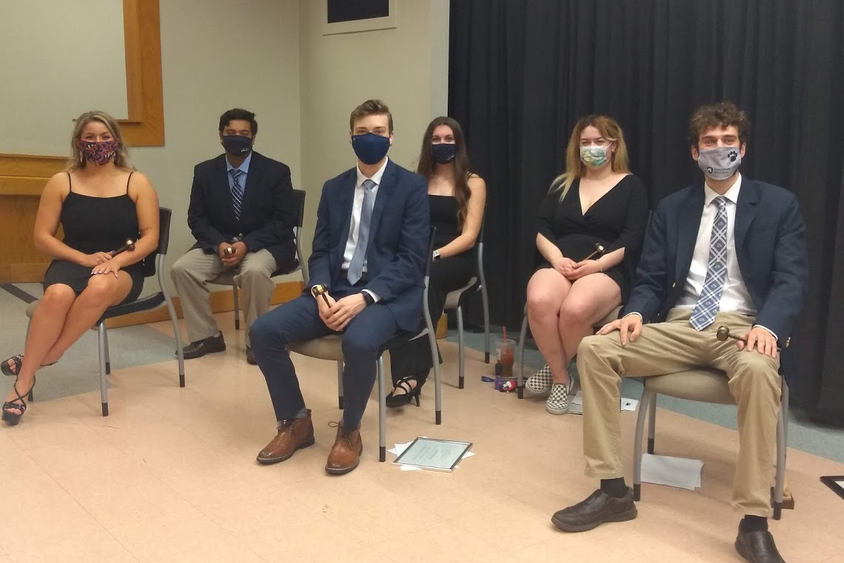 Special awards were presented as follows:

Lee A. Sweinberg Memorial Engineering Award, presented to Lawrence Corridoni III. The purpose of this award is to provide recognition for students enrolled in an engineering program who have demonstrated Penn State pride through campus service. Corridoni is a sophomore mechanical engineering major. He has been a member of SGA for two years and president for one year and co-chairs the Student Activities Fee and Student Facilities Fee committees. He also is a member of the Penn State Wilkes-Barre Advisory Board, Business Club and Lion Ambassadors, and he served as a leader for Welcome Week in fall 2020.

Eric A. and Josephine S. Walker Award, presented to Lawrence Corridoni. This award, established in honor of former Penn State University President Eric A. Walker, is presented to a student who has most improved the reputation of the University through extracurricular activities. This is one of Penn State's most prestigious student awards. Student recipients will have their names inscribed on a plaque that will be permanently displayed on the campus. They will also receive a certificate and an engraved medallion.

John R. Murphy Award for Excellence in Leadership, presented to David Neilson. This award recognizes a graduating senior at Penn State Wilkes-Barre who has completed four semesters at the campus and who, during those years, has provided excellent service to the campus. That service could have been exemplified through organization leadership, volunteering and participation in campus and community programs. Neilson is a senior earning his degree in surveying engineering. He has been a member of SGA for four years and served on the Student Activities Fee and Student Facilities Fee committees. He was also a member of the Four Seasons Club and THON.

Martin U. Dougherty Emerging Leader Award, presented to Benjamin Cebula. This award honors and recognizes an undergraduate student of junior standing who has shown promise as a campus and community leader. Candidates for this award must have a cumulative grade-point average of 3.0 on a 4.0 scale and have extensive involvement in both campus and community activities. Students nominated must have also contributed to the prestige and well-being of Penn State Wilkes-Barre and to the reputation of the University as a whole. Cebula is a junior rehabilitation and human services major and served as a Lion Ambassador for two years. He was also a member of SGA and an executive leader with SGA.

Florence Dougherty Pride of the Lion Award, presented to Robert Mastropole. This award is presented to a student of sophomore, junior or senior academic standing enrolled at Penn State Wilkes-Barre who exhibits exemplary qualities of personal character; campus and University spirit; and Penn State pride through active involvement in campus and community activities aimed at promoting Penn State Wilkes-Barre and/or the University. Mastropole is a junior majoring in administration of justice. He is a member of SGA, Students for Justice and the Veterans Club.

Outstanding Adult Learner Award, presented to Jennifer Sgroi. The Luzerne County Council Adult Higher Education Outstanding Adult Learner Award is presented to a student who has completed at least 15 credits at Penn State Wilkes-Barre, is 24 or older, has a minimum GPA of 3.0 and shows involvement in campus or community service activities and achievement despite adversity. Sgroi is graduating with her degree in information and technology and a minor in business. She has served as a student tutor, a writer for REVOLT, a member of SGA and chair of the Just Do It Committee, and a member of the Student Activities Fee and Student Facilities Fee committees.

The Hayfield Award, presented to Melisa Littleton, assistant teaching professor of rehabilitation and human services and coordinator of the RHS program. The faculty member selected for this award is designated by the Student Government Association as the outstanding instructor for the academic year. The award is based on a combination of teaching excellence and contribution to the general welfare of students at Penn State Wilkes-Barre.

Outstanding Club of the Year Award, presented to United Stance Society. Members of the student body, Student Government Association and Student Affairs select the recipient of the Outstanding Club Award. This award recognizes the student organization that has done exceptional campus and community service, has represented the campus to the best of its ability, and that has had the greatest positive impact on co-curricular life of students at Penn State Wilkes-Barre.

Outstanding Student Government Association Member of the Year Award, presented to Lawrence Corridoni. Nominations for this award are made by the executive board committee. Nominees must be an active senator, club representative or executive board member of SGA. The Outstanding SGA Member of the Year is chosen for his/her sincere dedication, devotion and overall excellence toward his/her position as a senator, club representative or executive board member, and as a Penn State Wilkes-Barre student.

The Lions Pride Award, presented to Susan Cunningham. This award honors a member of the campus community, faculty, staff, student(s) or community volunteers who have consistently worked to assist the Student Activities Office to help improve the quality of student life at Penn State Wilkes-Barre, through their encouragement and coordination of and/or participation in co- and extracurricular programming and events.

Lessons on Leadership Award, presented to Jennifer Sgroi. This is an eight-part leadership development series offered to any interested student at Penn State Wilkes-Barre. The workshops focus on a variety of leadership-building skills: leadership styles, communication styles, conflict management, servant leadership and more.

Lifelong Lion Award, presented to Kaci Grabowski and Evelyn Hosey. This award was created by the Alumni Society in order to recognize graduating students who exemplify what it means to be a Penn State student in spirit and truly “bleed blue and white.”

Athletic awards were presented to the following: