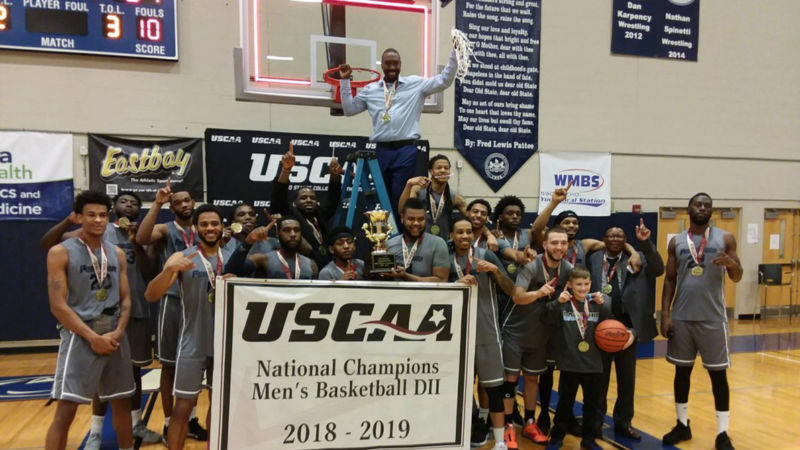 Led by USCAA Coach of the year, LeShawn Hammett, Penn State Wilkes-Barre men’s basketball team captured their first-ever national championship on Wednesday night, with a dominating 86-64 performance over Johnson & Wales (Charlotte, NC) to win the USCAA Division II title in the main arena on the campus of Penn State Fayette. The no. 3 seeded Mountain Lions capped the historic season by finishing 25-5 overall, including an 18-1 record in the PSUAC.

On their way to the championship, Wilkes-Barre won its quarter-final game over no. 6 seed NHTI, 70-68. Although the Mountain Lions relinquished a 21-point second-half lead, Jordan Williams led with 18 points and 18 rebounds. In the second semi-final match-up, Wilkes-Barre defeated no. 10 seed Vermont Tech 80-74, earning their way to the National Championship game. Wilkes-Barre was once again led by senior Jordan Williams with 19 points; junior Khalil White added 17 points.

In the championship game, Wilkes-Barre was led by tournament MVP Jordan Williams with 20 points and 12 rebounds. Wilkes-Barre teammates Ameer Biddle, Dominique Stevenson, and Levaugn Knight-Soules all contributed double figures in the win. Knight-Soules earned USCAA All-Tournament honors by adding 14 points, 9 rebounds, and 4 blocks. Wilkes-Barre led by as many as 23 points in the first half; the Wildcats got no closer than 15 points during the second half. Biddle finished the game with 17 points, while Stevenson added 13 points off the bench as Wilkes-Barre shot 48 percent from the field.

“The USCAA National Tournament is an amazing experience for our student athletes,” said Penn State Wilkes-Barre Athletic Director, Scott Miner. “Coach Hammett’s cultivation of a family atmosphere, along with his hands-on leadership, kept our players together even during times of adversity,” Miner said. “Our men’s basketball team and coaches represented themselves, their families, and the campus with class and dignity.”