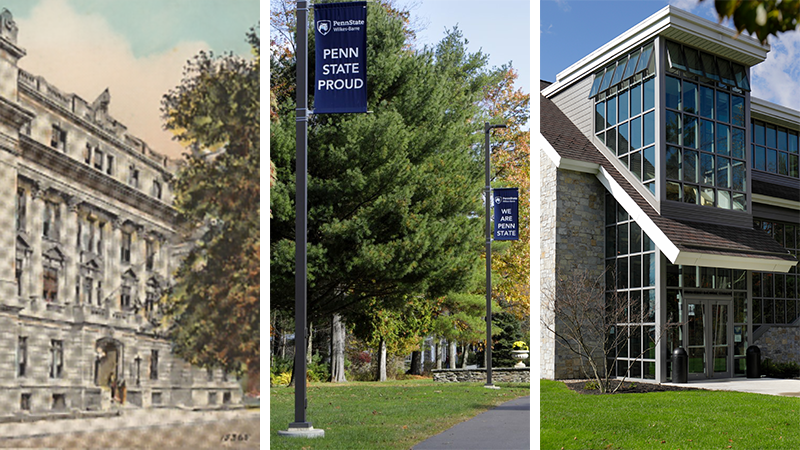 The campus’ mailing address is now 44 University Drive, Dallas, PA 18612, a change from the previous Lehman-based addresses the campus used for mail and deliveries. This address change is just one of many alterations that Penn State Wilkes-Barre has seen in its 104 years of existence.
Campus address changed to Dallas

Is the campus in Lehman, Dallas, or Wilkes-Barre? Where is Lehman? Is it in Dallas? Not Dallas, Texas? Why is Wilkes-Barre in the name, then? These are a few of the questions Penn State Wilkes-Barre students, faculty, and staff have likely heard.

Although we haven’t moved, the campus’ mailing address is now 44 University Drive, Dallas, PA 18612, a change from the previous Lehman-based addresses the campus used for mail and deliveries. Mail sent to the previous addresses will continue to be forwarded for a few months, although going forward, all mail sent to Penn State Wilkes-Barre should be sent to the new Dallas address.

“The Penn State Wilkes-Barre name encompasses the entire region we have served since our inception,” Chancellor and Chief Academic Officer Dr. Dale Jones said. “As part of Penn State, we are able to offer all the benefits and resources of a Big Ten school right here in the Back Mountain.”

Penn State Wilkes-Barre has had numerous locations over the years, going all the way back to its first home in Coughlin High School in Wilkes-Barre in 1916. That’s where Penn State first brought classes to the Wilkes-Barre area when the Pennsylvania State College Department of Engineering Extension began offering evening courses in advanced mathematics, surveying, and reinforced concrete and mechanics, all designed for coal miners. The school’s initial name was the Pennsylvania State College Engineering Extension School.

Classes remained at Coughlin High until 1950, when the school, at this point known as the Wilkes-Barre Center of the Pennsylvania State University, moved its classes to the Guthrie Building, itself a former school, on Washington Street in Wilkes-Barre.

A permanent home was eventually found in 1966, when Richard and Helen Robinson of Connecticut purchased Hayfield House and the surrounding property and donated the home and estate to the school. Hayfield House had been built in the early 1930s by coal baron John N. Conyngham and his wife, Bertha, who raised a variety of animals and crops at their farm. Although originally built as a vacation home, the house had become the primary residence of the Conynghams.

After renovations were undertaken on the property, the campus began welcoming students in 1968, with classes initially held in Hayfield House. The house is now used for administrative offices, while the Conyngham’s former 19-car garage has become the Student Commons and Bookstore.

What’s in a name?

Throughout its history, the school now known as Penn State Wilkes-Barre has had many other names, reflecting its changing offerings; however, the campus’s primary purpose of educating local residents has remained constant. Those names have included:

“Our name and address may have changed over time, but our mission of providing the best education for all who desire to come here has remained steadfast,” Jones said. “We’re also proud that since our earliest days, we have worked with local employers to find out what their needs are and how we can carefully align our course offerings to meet those needs.”

In addition to historic Hayfield House, the campus now includes the Student Commons, the Athletic and Recreation Building, the Science Center, the Bell Center for Technology, the Friedman Observatory, the Murphy Student Services Center, the Struthers Family Career Services Center, and the Nesbitt Academic Commons.