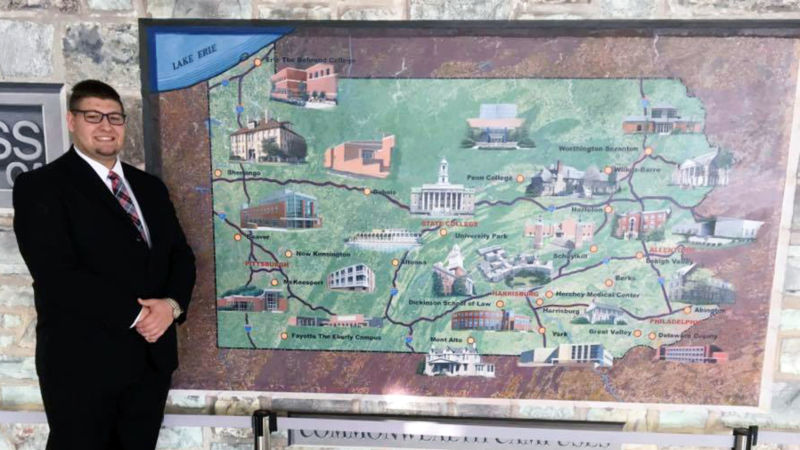 Take a moment to get to know your Student Government Association President, Barry Pawloski!
By: Rachel Olszewski

You are SGA President this year, what are three items you hope to accomplish for the 2017-2018 academic year?

Three items that SGA would like to accomplish is regaining the common hour, increasing student involvement, and providing more service to our community.

What does it mean to you being SGA President?

It means the world to me knowing that my friends and the student body have confidence in me to represent them. It makes my role very special to me.

You're also the University Faculty Senate Student Senator, one of two from the Commonwealth Campuses, tell us more about that.

Yes, I am a Senator for the University Faculty Senate at University Park. In order to get this position, I had to be nominated. There were nine students nominated from the Commonwealth Campuses but there are only two senator positions which was based solely on student body vote. After a couple weeks of voting, I got the email saying “Congratulations on your selection as a Student Senator to represent University College students in the UFS!  Your selection is a major accomplishment and reflects great confidence that others have in you.”

Currently, I represent roughly 40,000 students across the Commonwealth. As I said in my campaign, and stand by very strongly, “My voice will be your voice. Let your voice be heard at University Park.” I am not sure who nominated me, but whoever did I would like to thank them for this life-changing opportunity.

What is your dream job once you graduate from Penn State Wilkes-Barre?

My dream job is to work in the corporate world or become the President of the United States of America.

If you could eat a meal with anyone in the world, dead or alive, who would it be and what would the meal be?

I would have dinner with Mr. Walt Disney and our meal would be chicken parmesan.

What is your definition of happiness?

The definition of happiness for me is spending time with my family and friends and taking on life one day at a time to live the American Dream.

What is your spirit animal?

A Lion. I have a heart of a lion, I always say, “Do something good for someone whether it is today or tomorrow.”