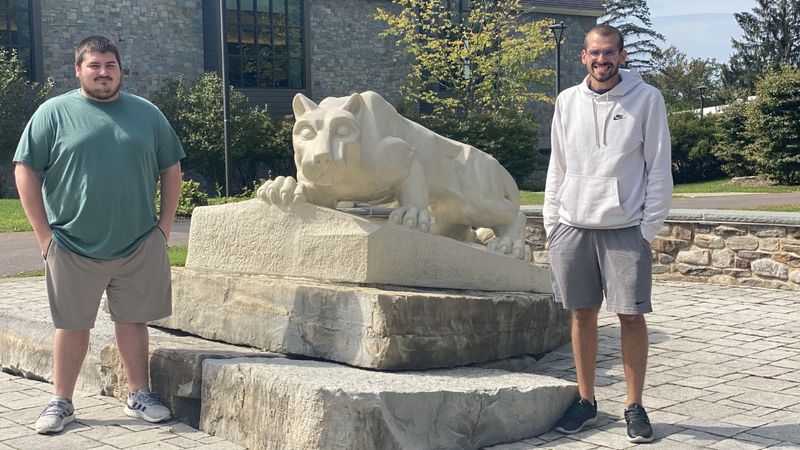 A major and a minor offered at Penn State Wilkes-Barre provided just what two students were seeking to build their future careers. Friends Ryan Price and Brandon Steidinger are both seniors who opted for a major in administration of justice with a minor in rehabilitation and human services (RHS)...
By: Goldie Van Horn
Friends find major-minor combination at Penn State Wilkes-Barre to be ideal

A major and a minor offered at Penn State Wilkes-Barre provided just what two students were seeking to build their future careers.

Friends Ryan Price and Brandon Steidinger are both seniors who opted for a major in administration of justice with a minor in rehabilitation and human services (RHS) because they wanted to make changes in the world and in the field of justice.

Price and Steidinger have been friends since high school, meeting at Wyoming Valley West in 10th grade. They opted to go to Penn State Wilkes‑Barre for its small size and close proximity to home.

“I wanted to go to Penn State from the get-go, but not University Park because of how big it is,” said Price, who lives in Kingston. “I’m used to having smaller, more interactive classes, and I feel that Penn State Wilkes‑Barre helps me learn better that way. I also like the close‑knit community here on campus.”

Steidinger, who lives in Plymouth, said that growing up, he always wanted to attend Penn State as well.

“I wanted to stay at Penn State Wilkes-Barre because it was local to home and I could continue the one‑on‑one interactions I was used to having with my teachers,” he said.

Steidinger initially thought he would study engineering but decided to major in administration of justice.

“I really want to make a change,” he said. “We see kids really at risk of getting into crime from a young age, and I think the system has issues.”

On the other hand, Price knew for a long time he wanted to major in administration of justice.

“Even when I was little I wanted to be in the criminal justice field, although I didn’t know exactly where,” he said. “I always found it interesting and wanted to pursue that, especially with what’s been going on lately, with a lot of controversy and disagreement in the world.”

The criminal justice program at Penn State Wilkes-Barre encompasses their administration of justice major. The pair found that the rehabilitation and human services minor at the Wilkes-Barre campus was the perfect complement to their major.

“Taking criminal justice and RHS courses at the same time helped me see both sides of the justice system. It helped me be able to see how victims handle crime, and I now have the balance of understanding both sides,” Price said. “The programs at Penn State Wilkes‑Barre do a good job of giving us the basics and an understanding of the system.”

Steidinger said, “Looking at just the criminal justice side of an issue, you might not think about why offenders do what they do. By studying RHS, you get both perspectives. The fields relate to each other really well.”

Faculty members in the criminal justice and RHS programs at the campus described Price and Steidinger as dedicated and visionary students.

“Brandon and Ryan both clearly see the restorative ‘web of connections’ within the criminal justice system and between people in the world at large. I have no doubt that they will graduate from Penn State Wilkes‑Barre and go out to change the worlds they live in for the better,” said Jeremy Olson, assistant professor of criminal justice.

Melisa Littleton, assistant teaching professor and program coordinator for RHS, said, “Ryan and Brandon are hardworking, compassionate students who value their education. They both aspire to make the world a better place once they graduate. They are eager to learn about the roles and responsibilities of a helping professional because they understand how much this knowledge will complement their criminal justice education and help them in the future when working in the community.”

The students said their relationships with faculty at Penn State Wilkes‑Barre have been instrumental in their education.

“We were in Dr. Olson’s first group of students here. We learned with him and he learned with us. I know I can go talk to Dr. Olson whenever I need and he’ll guide me in the right direction,” Price said.

Steidinger said, “Ms. Littleton is really nice and helpful with anything I’ve asked for. Not many teachers go out of their way and put out snack bins for students, but she cares about our well-being and mental health. You can tell the professors really care about you here. You’re not just a number at Penn State Wilkes‑Barre. The professors take the time to know who you are.”

In addition to faculty support, Steidinger credits scholarships as a major part of his ability to be successful in college. At the Wilkes‑Barre campus, 85 percent of students qualify for need-based financial aid.

“I was fortunate to receive scholarships each year I’ve been at Penn State Wilkes‑Barre,” Steidinger said. “The scholarships have covered close to 20 to 25 percent of my college tuition. That’s a huge burden that’s lifted off my chest. I can cut back on some hours at work and focus on my education.”

Price and Steidinger are both members of the campus Students For Justice club and work at Sheetz in Wilkes‑Barre Township.

“We do it all, from running registers and stocking coolers to making food in the kitchen and preparing bakery items,” Price said.

Through working while attending college, he has learned how to balance his schedule and workload.

“Going to college is definitely an eye-opener. Doing your work on your own is an adjustment,” Price said. “It can get overwhelming once in a while and you have to learn to do what you can to slow down.”

Steidinger recognized that Sheetz is “a great company” to work for and said flexible scheduling and hours have allowed him and Price to balance working while attending college.

“Sheetz also has tuition reimbursement to allow their workers to go to school. Working for a great company that supports students going to school, that helps me be successful,” he said.

Next semester, their schedules will get even busier as they will each complete an internship. And they will continue to be there to support each other.

“We’re really close,” Price said. “We see each other every day, whether at work or school.”

Olson said, “If Brandon and Ryan were brothers, they would be conjoined twins. They are always together and always thinking critically about criminal justice issues.”