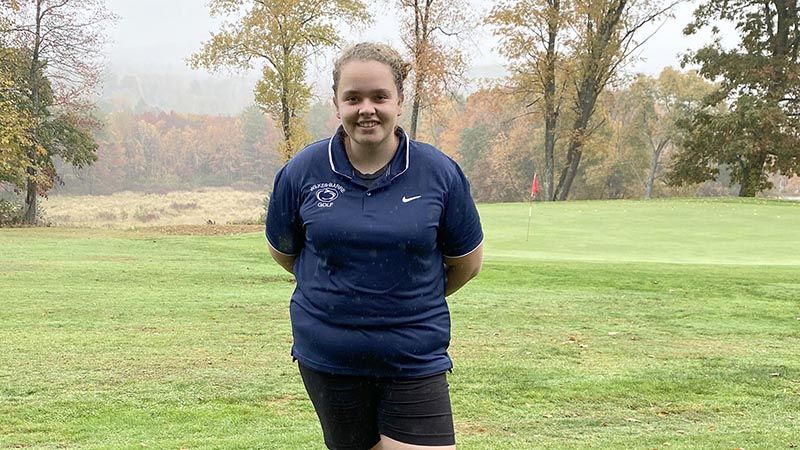 Only, but not lonely

As an engineering major and as the only female on the Penn State Wilkes-Barre men’s golf team this year, Mariah Tague is used to forging her own way toward her goals. “I come from a lot of male-dominated sports so I’m fairly used to being a lone female or maybe having one other,” she said, noting that all her teammates and coach have been supportive of her.

As an engineering major and as the only female on the Penn State Wilkes-Barre men’s golf team this year, Mariah Tague is used to forging her own way toward her goals.

Tague, a sophomore majoring in electrical engineering technology, began her golf career at Tunkhannock High School, where she spent two years on the girls’ team — one of which went to the state championship — and two years on the boys’ team.

“All the girls I played with during my freshman year graduated, and we didn’t have the numbers for a girls’ team the next two years,” Tague recalled. Her senior year, she and her high school coach recruited more girls to play, and the girls’ golf team resumed play.

She chose Penn State Wilkes-Barre because it was close to home and she loved the rural grounds.

“Penn State is also well known for its engineering programs,” she said. “You can go far away and people will still know Penn State engineers.”

Jeffrey Chiampi, assistant teaching professor in engineering, praised Tague’s skills inside and outside the classroom.

“I have had the pleasure of having Mariah in several classes. She is an exceptional and inquisitive student who does a very good job of balancing the requirements of being a student and an athlete,” he said. “I have witnessed Mariah leading student groups in the classroom and saw firsthand how the teamwork skills she has developed as an athlete have benefited her group interactions.”

Tague didn’t think she would continue her golf career in college, but found her way to the Penn State Wilkes-Barre golf team during her first week on campus.

“I was going to focus on academics and had no intention of playing golf on campus,” she explained. “I went a whole two days before I attended the activity fair to learn more about clubs and sports and found the golf team.”

Since the campus is a small environment, she wasn’t surprised to find herself the only female on the team, although it is open to both men and women. Just three women have played on the Penn State Wilkes-Barre golf team before Tague did.

“I come from a lot of male-dominated sports so I’m fairly used to being a lone female, or maybe one of two,” she said, noting that all her teammates and coach have been supportive of her.

“From the time Mariah arrived on campus, she showed a willingness to learn. She has been a valuable asset to the team, becoming a starter from day one, and she’s very well respected by her teammates,” said Ed Keil, Penn State Wilkes-Barre golf coach.

Like other sports and activities, golf has looked different during the pandemic. The season was moved from the fall to the spring, and the number of practices and matches was reduced. This year’s golf season will be two matches: one on April 19 at Penn State Hazleton and one on April 22 at University Park. Both matches will be against other Penn State University Athletic Conference teams.

In addition to golf, Tague works on her family’s farm raising beef cattle and pigs. She also mentors and helps coach the archery and robotics teams she was part of during high school. For eight years, she participated in competitive archery through the National Archery in the Schools Program, qualifying for the organization’s national tournament seven of those years. She was also a member of Tunkhannock’s FIRST Robotics team.

After school, Tague hopes to work in the industrial or creation sector.

“I love knowing how things work and I already have a pretty good mechanical background. I felt that if I could get a good background in electrical engineering, I could be fairly unstoppable,” she said.