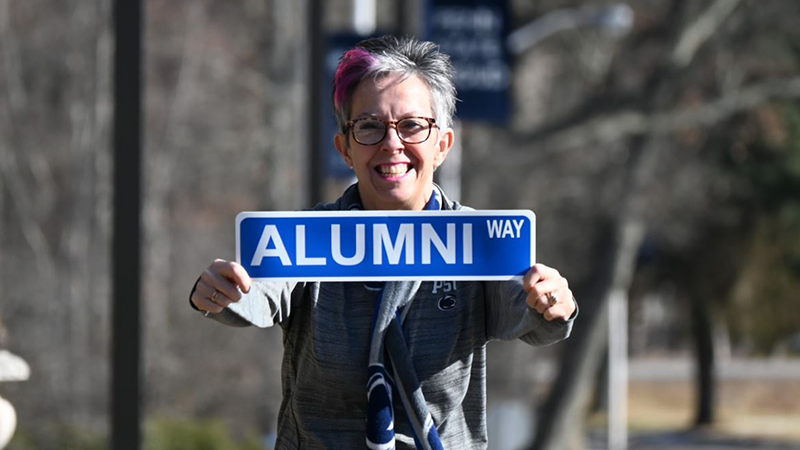 The thousands of students who have come through Penn State Wilkes-Barre since Jacqueline “Jackie” Warnick-Piatt began working at the campus in the late 1990s now have the opportunity to connect with her as alumni. After 23 years in her role as student activities coordinator, Warnick-Piatt began a new position as alumni relations and stewardship officer in late 2021.
By: Goldie Van Horn
Former student activities coordinator takes new role as alumni relations and stewardship officer

The thousands of students who have come through Penn State Wilkes-Barre since Jacqueline “Jackie” Warnick-Piatt began working at the campus in the late 1990s now have the opportunity to connect with her as alumni.

“I have had the privilege of meeting so many students. I loved student activities and all that came with it, but when this position opened, it seemed like the perfect progression,” Warnick-Piatt said. “In my new position, I get to work with 23 years of students who are now alumni. And I will still have the opportunity to work with current student volunteers, both in my role as coordinator of Alumni Relations events and as adviser for the Blue and White Society.”

She noted the importance of making connections between current students and alumni along with the benefits that networking provides, saying, “Some of those alumni are the people who are hiring this round of current students. They have been in the workforce for 5, 10, 15, even 20 years and are making the hiring decisions. I’m so excited to help develop those connections.”

Warnick-Piatt is now working with Director of Campus Development Cara Green, who welcomed her wholeheartedly to the Alumni Relations department.

“Anyone who has had the pleasure to speak with Jackie has felt her warmth, enthusiasm and passion—all of which she conveys to our alumni, students and friends of the campus,” Green said. “I’m excited to see the innovation and engagement that she will continue to bring to her new position.”

From ski equipment to students

In 1997, as a volunteer with the Wyoming Valley Women’s Network (WVWN), Warnick-Piatt served as the liaison between the network’s Luzerne County Women’s Conference and Penn State Wilkes-Barre, the site of the conference. She was told about the opening for a co-curricular program coordinator at the campus, and the role and part-time hours immediately appealed to her as a mother of two young children.

“At the time, I was selling ski equipment and volunteering with the WVWN,” Warnick-Piatt recalled. “I applied and interviewed with a committee that included students, some of whom I still keep in touch with. My children were 5 and 3 when I started, and they’re now 29 and 27.”

As her children grew, her responsibilities and hours also steadily increased throughout the years. In 2005 the position became full-time, 10 months of the year.

“I like to say my job was not all fun and games, but most of it was,” Warnick-Piatt said. She handled all types of programming for the campus, including events, leadership conferences, and program series. One of her first tasks was joining the advisory board for Intercollegiate Leadership and helping develop their leadership program for students from six local colleges. She also planned events to highlight nationally recognized days and months such as Black History Month, Women’s History Month, National Coming Out Day, and Chinese New Year.

“Students attend our programs for maybe one or two hours. I’ve had students come up to me years later to share what they learned during those events,” she said. “We try to have as much impact as we can in that brief period. It’s a different kind of learning.”

Warnick-Piatt remembers her favorite program, the Religious Diversity Series, which won a University award for best program of the year.

“We brought in six different leaders from various religious communities: a rabbi, a Zen Buddhist monk, and leaders from the Quaker, Hindu, Muslim and Native American communities. We brought them and other religious leaders back for multiple years and had huge turnouts. Students, faculty, and staff all loved it,” she said, adding, “I learned so much about the diversity of people’s beliefs, but at our core, we’re really so much alike.”

Building relationships and remaining in contact with students has been a constant theme throughout Warnick-Piatt’s time at Penn State Wilkes-Barre. It’s not an exaggeration to say that Jackie knows everyone—and everyone knows Jackie.

“I keep in touch with former students, faculty, and staff, as well as many agents, artists, and performers I’ve worked with,” she said. “I recently reached out to my first Student Government Association president from 23 years ago.”

She said there were many joyous occasions such as weddings that she has been honored to be invited to. One of those was for Tom and Mary Conti, who met at Penn State Wilkes-Barre and later married. She served as matron of honor at their wedding in 2009 and now babysits their children.

“Tom and I both came to know Jackie during our first year at Penn State Wilkes-Barre. Jackie was, and always has been, a positive light in our lives,” said Mary Conti, who now serves as president of the Penn State Wilkes-Barre Alumni Society. “Her support and friendship when we were students never wavered as we entered young adulthood and went through all the ‘firsts.’ I couldn't think of a better person to have as my matron of honor than Jackie. Following our first apartment and marriage, Jackie evolved into ‘Aunt Jackie’ with the birth of our children.”

When asked to name a few of her favorite memories, Warnick-Piatt replied, “There are so many, I don’t even know where to start.”

One of her favorites was a regional leadership conference for students attending the Wilkes-Barre, Scranton, and Hazleton (and later Schuylkill and Lehigh Valley) campuses.

“We would take the students away for a 24-hour conference, which included 13 hours of workshops,” she explained. “It was an amazing bonding experience for the students at those campuses, whose Student Government Associations worked very closely together.”

Through those conferences, she said she enjoyed seeing students who tended to be more quiet and shy come out of their shells and eventually develop into student leaders at Penn State Wilkes-Barre.

She also remembered the Haunted Forest fundraisers for THON hosted by the Student Government Association at a time when there were only a handful of haunted locations for people to visit around Halloween.

“We had 65 student volunteers each night chasing members of the community with chainsaws,” she recalled. “I love being scared. It was so much fun, and we raised a lot of money for THON. One year, we raised over $10,000 during the six-night event.”

“The presenters would get students involved,” she said. “I tried to do everything I could to make sure students were participating and getting engaged.”

She has always enjoyed seeing students have an “aha” moment while attending one of the programs she planned.

Penn State Wilkes-Barre has seen many changes during Warnick-Piatt’s 23 years, both in personnel and in physical appearance.

“When staff members retire, new staff members come. We have an amazing staff and amazing faculty here and it breaks my heart when I see any of them leave. I think the students really appreciate the connections they make with them,” she said.

“It was so nice to have been able to be mentored by a group of women when I first started here. They were so welcoming and open. They have since retired,” she said. “For the new people who have filled those positions, I hope I have also mentored and helped along the way.”

The campus had six buildings when Warnick-Piatt came on board. Since that time, the Nesbitt Academic Commons has been built and the Struthers Family Career Services Center has been added on to the Athletic and Recreation Building. The former library is now the John R. Murphy Student Services Center.

“It’s been really amazing to watch those buildings grow from what was a field to such nice additions to the campus,” she said. “I was in the same office for 23 years and when I started, the building was half the size it is now. It’s much brighter and lighter, too.”

Although Warnick-Piatt has been through numerous changes since she first joined the Penn State Wilkes-Barre staff, the connections she has developed link her prior role and her new position.

“Jackie's energy is infectious and motivating. When you're around her, you want to pitch in to help and be the best version of yourself,” Conti said. “There were many times as a student when I was stressed, nervous or just plain grumpy, but Jackie always lent an ear to listen. She will be an asset to alumni not only because of those same personality traits, but also because of her devotion to Penn State that is unparalleled. She holds such a love for our university and our campus that, coupled with her ability to engage and make friends wherever she goes, she will only find great success.”

When Warnick-Piatt was asked how long she sees herself being at Penn State Wilkes-Barre, she pointed out that her great-aunt lived to be 108.

“But let’s say that another 23 years here would be fantastic,” she said. 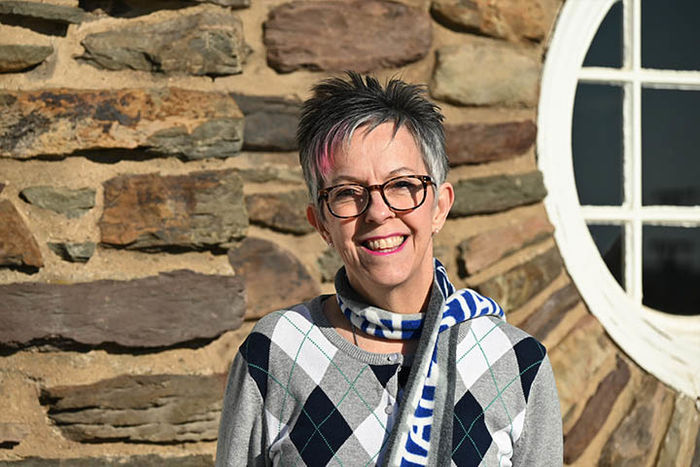