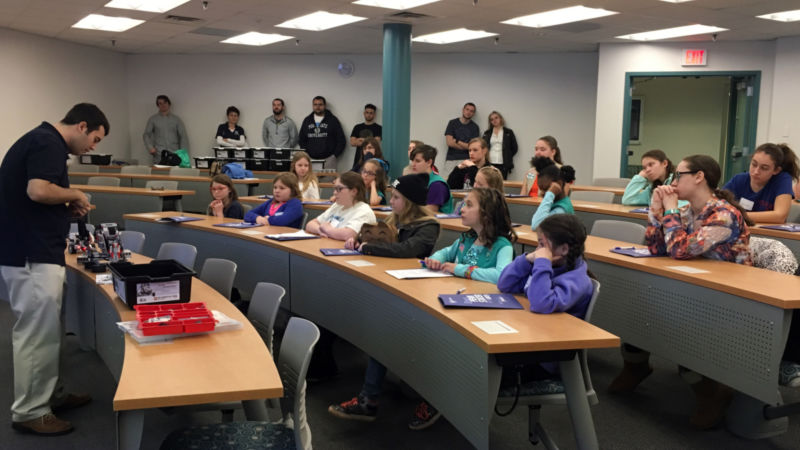 Changing The World With STEM

Young ladies are natural-born scientists looking at the world around them with inquisitive eyes, experimenting and pushing boundaries, all while learning as they go.
By: Rachel Olszewski

When Mindy Wesley took over the Back Mountain Girl Scout Community, she was trying to get some of the community connections back that the area hadn't seen in a number of years. A partnership between a science based university seemed like the right choice in all aspects

“I decided to ask Penn State Wilkes-Barre to help because I felt that the girls would get more out of STEM (science, technology, engineering, and mathematics) if it was done by professors with students, not the leader they spend time with every week,” explains Wesley. “Penn State can also offer a wider array of topics than I could just on a leader level.”

Over 160,000 Girl Scouts participate in STEM programs annually, and a majority of councils offer their members more than ten STEM programs each year. These programs serve to engage young women in STEM topics and scientific reasoning, and allow them to apply concepts learned in school in new ways.

While the content and intensity of STEM programs vary, they are often developed with the same impact goals in mind—increasing girls’ interest in STEM, increasing girls’ confidence in their STEM-related abilities, educating girls about STEM careers, and exposing girls to STEM professionals, to name a few.

“I am so grateful for the faculty and staff at Penn State Wilkes-Barre that were willing to put together workshops for our troop,” says Wesley. “They were more than willing to work with me on a no-fluff series. I want the girls to have fun, but I don't want them doing traditionally girly activities. I really want to give them the opportunity to explore some real careers.”

Girl Scouts from the area participated in their first campus STEM workshop in February with Jeff Chiampi, Instructor of Computer Science. Scouts worked in small teams to build and program their own robot using the latest Lego EV3 robotics kit. Once programmed, robots took on the challenge of obstacle courses.

“Jeff and his student helpers were beyond wonderful. The girls related to them and listened and really learned from them,” states Wesley. “They were sad they had to take apart their robots at the end of the day. I heard several say on their way out the door that they would love to do more interactive things like the robotics workshop. Parents were absolutely amazed at what the girls had learned while they were there.”

“According to the United States Department of Commerce, STEM related occupations are growing at a rate of 17% while other fields are growing at a 9.8% average,” explains Chiampi. “Female students are less likely to pursue a career in a STEM field so this workshop series is an important stepping stone in showing them there is a wide array of opportunity out there for them.”

“I am hoping for the girls to see that some of these ‘jobs for men’ are not just for men,” says Wesley. “Girls can do anything. Frouke [de Quilettes, Senior Instructor of Information Sciences and Technology] really tried to drive that home to the girls while she and others in STEM fields spoke to them during lunch. I cannot wait to see what the faculty and student helpers put together for the girls through this series.”

Upcoming workshops in the series will include a session on creating a web page from scratch with de Quillettes and an Earth Day activity that will incorporate biology, surveying engineering, and physics/astronomy.