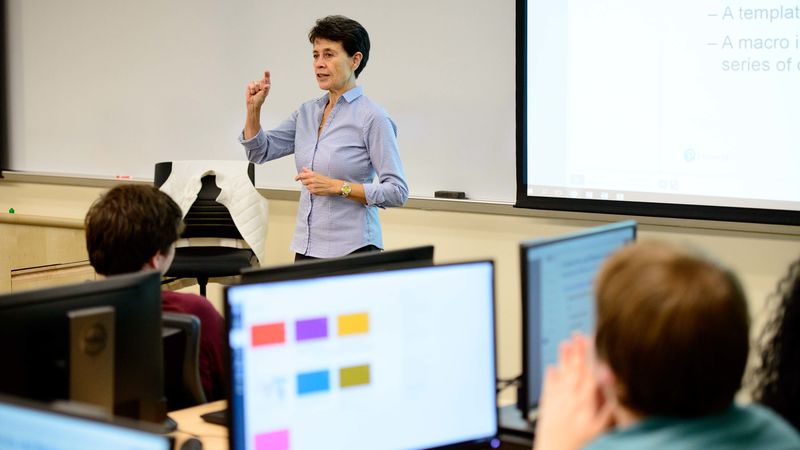 From calculator to computers

She’s nothing if not adaptable: from an elementary-school teacher in Europe to a college professor in the U.S.; from a business instructor to an IST professor; and from teaching in person to delivering Zoom classes. Now, after more than 20 years at the campus, Frouke de Quillettes has taught her last course at Penn State Wilkes-Barre.
Associate teaching professor of IST retires

Once she was an elementary school teacher; later she became a college professor.

Once she lived and worked in the Netherlands; now, the United States has been her home for more than 35 years.

Once she had never worked with computers; now she’s leaving a job where she taught computer programming.

Throughout Frouke de Quillettes’ career, her story has been one of adaptation. She began teaching elementary school in the Netherlands and later taught at colleges in the United States. She taught college-level business courses, then helped initiate a new program in information sciences and technology at Penn State Wilkes-Barre. And finally, she adapted to providing lessons entirely online for her last months of teaching as Penn State shifted to remote learning in the face of the coronavirus pandemic. Now, after more than 20 years at the campus, this associate teaching professor of information sciences and technology has taught her last course at Penn State Wilkes-Barre.

Frouke’s career began with teaching elementary school in the Netherlands. Born in Indonesia, de Quillettes and her family left New Guinea as refugees when the country became independent. They moved to the city of Sittard in Holland when she was 5 years old.

“My first day of elementary school, I looked at my teacher and thought, ‘That is what I want to do,’” de Quillettes recalled.

“I come from a big family with five younger sisters, and I was always playing school and teaching my sisters,” she said. “Often when you become older, you change your thoughts and your plans, and I became interested in computers. It was during an era when there were no computers and we used slide rules and mathematical tables. My last year of high school, my father gave me a calculator. I was so intrigued that I opened it and took it apart and saw how small the chips were. The calculator wouldn’t work anymore after that, but that was how I became interested in computers.” 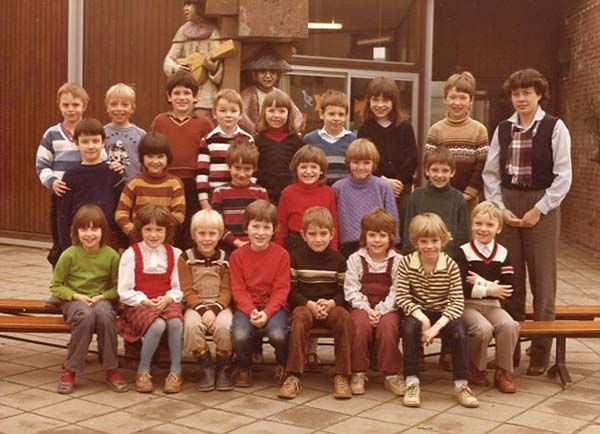 Frouke de Quillettes with her class of fourth-graders in the Netherlands.

De Quillettes earned a degree in elementary education in 1980 and worked as an elementary school teacher before moving to the United States in the early 1980s. She ran into difficulty transitioning her degree in the United States; she needed to take two more years’ worth of courses to receive the degree she had already earned in Holland. So she decided to pursue her interest in mathematics and computers. After earning her bachelor’s and master’s degrees in computer science from the University of Buffalo, de Quillettes began teaching courses at Erie County Community College.

Frouke came to Penn State Wilkes-Barre in 1997 as an instructor of business, teaching programming courses and the new Microsoft Office software through the Department of Continuing Education. Two years later, the campus began planning to offer a degree in information sciences and technology. De Quillettes was asked to help establish the new major and department while also teaching courses.

“At first, I didn’t want to do it. It was hard for me because I was a scientific programmer and I had to learn to include the business-focused part along with my programming,” she said. “The business part requires a lot of people and teamwork skills that it took me some time to get used to. But I loved the teaching part, the students, and using my background of teaching and pedagogy.”

In addition to the IST program, de Quillettes lent her assistance to Assistant Teaching Professor of Engineering Jeffrey Chiampi in developing the new game development  minor at Penn State Wilkes-Barre.

“It was very artsy and I had to learn quite a bit,” she recalled of the new program and the class she taught in gaming during the first semester of the program.

Being part of the discovery

De Quillettes’ favorite part of teaching is what she calls the “aha moment”—when something clicks for a student for the first time.

“My teaching style is very hands-on. I want students to feel what it is to create something that is applicable in their lives. I want them to be able to apply it to real applications that they can use,” she said. “What I enjoy most is when suddenly, something is working for my student. It is like experiencing some of the discovery along with the student.”

In entrepreneurship, a passion of hers, Frouke has gotten to experience several “aha moments” with teams of students. De Quillettes has led several groups in entrepreneurship challenges, with some of the groups earning awards at entrepreneurial competitions.

“I really like to be involved in undergraduate research, where students invent or make practical applications better,” she said.

Her students won first place in the annual tecBridge Entrepreneurship Institute competition for two years in a row, with a third place the following year. In 2013, the ASIT (Accountability for Students In Transit) project earned first place. ASIT was designed as a tracking system for K-12 students riding a school bus, verifying their pick-up and drop-off locations and notifying parents or guardians that a child has arrived at their destination. The next year, her students won first place for EZ VetNotes, a hands-free system for small and/or large animal veterinarians. The system converts a spoken consultation from an exam into text that can be sent and stored to a secure server linking the converted speech and animal records.

De Quillettes held a competition in a programming class to create an app to view the Penn State Wilkes-Barre Blue Screen messages on cell phones; the resulting app is now used by students, faculty and staff across campus.

“Frouke has the ability—no, the genius—to teach mathematical logic and algorithmic functions in a way that students not only find fun but leads them to develop apps for consumers and understand the integration of information for real world use,” said Lynda Goldstein, associate chief academic officer and associate professor of English. “Soft-spoken, modest, with a wry sense of humor, Frouke is one of the most decent people I've ever known. She is concerned that students learn, of course, but she is most concerned that they be good human beings, attentive to what others need so they can use their skills to deliver it.”

Margie Esopi, campus registrar, said, "I have had the pleasure of working with Frouke for years, and during that time, she has impressed me over and over again with her unparalleled concern for her students. She has been generous with her time, her efforts, and her own resources, but doesn’t want publicity or recognition. She is content to do good in the world and not get any credit for it.”

One of de Quillettes’ former students, Stephanie Feddock, took every IST and computer science class she could with her.

“Frouke is the reason I continue to push myself and encourage other students, especially women, to pursue STEM subjects (science, technology, engineering and mathematics),” said Feddock, who graduated from Penn State Wilkes-Barre in 2004 with a bachelor’s degree in IST. “She provided me guidance when I was deciding next steps after graduation, and she helped me align my goals to my values. Not many people have the ability to do this, and she does it with such kindness.”

“When I was struggling with motivation to complete my doctorate, I reached out to Frouke and explained to her my shame for wanting to quit and the fear if I did, I would never start back up. With compassion and understanding, she encouraged me to take time to heal myself, and assured me that the commitment would be there to finish, eventually. It was the best advice I received,” Feddock said. “I took time off and when I was ready to complete my doctorate, I did it with passion and dedication. Frouke was put on my path for a reason, and I only hope to be the person she is to me for someone else.”

Feddock works as a lead software architect at MetLife, where she focuses on enterprise security architecture and foundational building blocks. She has spoken to de Quillettes’ classes as a guest speaker and mentored students as part of the Penn State Mentoring Program.

De Quillettes is particularly proud of her successful female students. As a woman in a traditionally male-dominated field, it hasn’t been an easy path for her to forge.

“Many times in my graduate computer science classes, I was the only woman, or one of two women,” she recalled. “In the beginning of my teaching career, it was very hard and I had to prove myself. I had to always be on my toes.”

She is happy to see more women joining the IST program and to observe their male classmates supporting them. “The men are really open to that and it’s a totally different generation.”

The end of an era 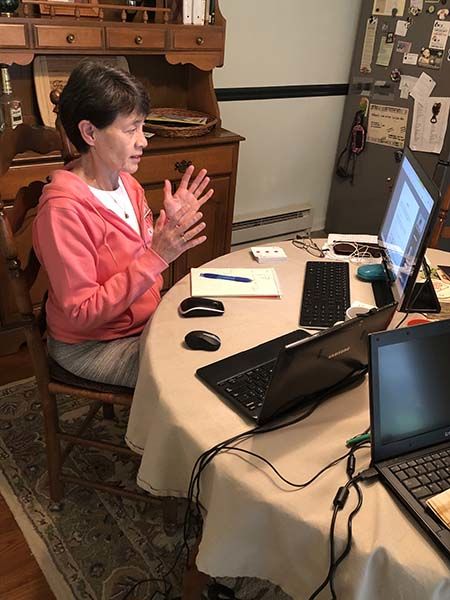 Frouke de Quillettes teaches a class over Zoom during the coronavirus pandemic.

One of de Quillettes’ biggest challenges came at the end of her career—the coronavirus pandemic and the resulting transition to online teaching.

“I never thought I’d end my career teaching in front of a computer,” she said. “I made the best out of it and I think my students had fun with it. They didn’t miss a beat.”

Frouke used two computers, both connected to Zoom, to teach her classes. One computer shared video of de Quillettes teaching, while the other was used as a whiteboard so the students could see what she was teaching.

“Math is hard to teach online, so that’s why I used the whiteboard,” she explained. “I wrote all my formulas on it so the students could follow what I was doing. Every five to seven minutes I’d do a check-in to have them show me if they understood or needed help.”

But for de Quillettes, it was just part of her adaptation to something new, always with the goal of being the best possible teacher for her students.

“Throughout my career, I had to keep up with technology and its fast-changing growth. I didn’t want to do the same thing every year. Every summer, I learned new programming skills, to make sure I could do it myself before I taught it to my students and expected them to do it,” she said.

This summer, there will be no programming in her plans. In her retirement, she first plans to have no plans and take a few months to relax at her cabin in the Carbondale area. She then wants to spend her time volunteering. “I would like to teach minorities Excel, because if they know how to use Excel, they can obtain jobs that will increase their hourly wages. I would also like to work with refugees to help give them a better place to live. I was a refugee when I was young,” de Quillettes explained.

The campus community wishes de Quillettes well in her retirement and appreciates her years of service and dedication to her students.

“I will miss her quiet but very important presence on campus. She is a valued colleague and to me, a valued friend,” Esopi said.