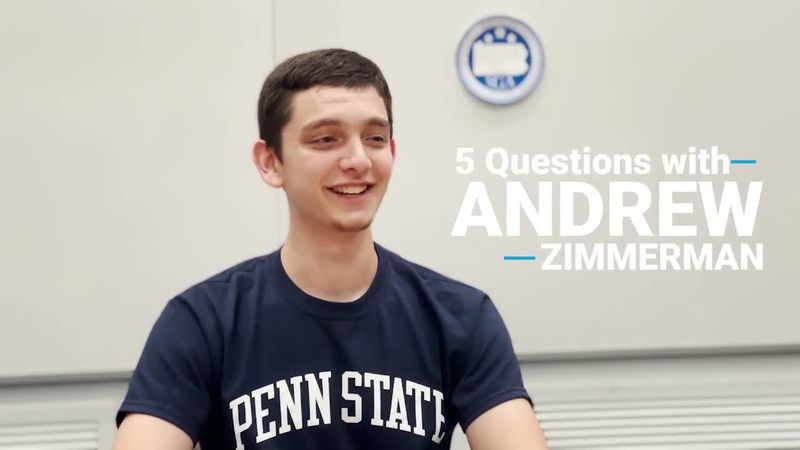 Andrew Zimmerman came to Penn State Wilkes-Barre with the intention of moving on to University Park after two years. But after getting immersed in his information technology major, he decided to stay at the local campus to complete his degree.
By: Goldie Van Horn
New SGA president looks forward to four years at Wilkes-Barre

Andrew Zimmerman came to Penn State Wilkes-Barre with the intention of moving on to University Park after two years. But after getting immersed in his information technology major, he decided to stay at the local campus to complete his degree.

“I’ve known I wanted to go to Penn State for a long time and Wilkes-Barre was very close to home, so going here gives me a way to save money and still have that Penn State degree,” said Zimmerman, who is beginning his second year at Penn State Wilkes-Barre. He is a resident of Harveys Lake and a graduate of PA Cyber.

“I was initially considering doing the 2+2 Program, but after getting more involved with my major and talking with my professor Brian Reese (lecturer in information technology), I decided to stay and do all four years here,” Zimmerman said. “He showed me all the lab equipment at the campus and talked to me about all the things we have here to support IT. Actually getting to use the equipment in the career I want is a big selling point.”

Zimmerman said he also appreciates the IT faculty at the campus. “I love how Professor Reese always brings up his personal experience in the workforce with every lesson we go over. It helps his students understand how it correlates to the situation. He’s very good at being as helpful as he can be.”

Zimmerman noted that Reese is just one of many influential faculty and staff members at Penn State Wilkes-Barre. “All the faculty and staff at the campus are super friendly and welcoming. They are always incredibly helpful whenever you have a question. They’re so easy to talk to, and there is always somebody with an answer.”

Reese described Zimmerman as “an excellent student,” saying, “Andrew is able to juggle his advanced studies, extracurricular activities, and working a part-time job. His activities, including the Student Government Association, give him an in-depth understanding of his fellow students’ concerns and issues. He has a deep passion for technology and cybersecurity that is shown in the classroom and during hands-on labs.”

In addition to academics, Zimmerman is engaged with many clubs and or­gan­i­za­tions at Penn State Wilkes-Barre. He learned quickly “how easy it is to get involved,” joining several clubs early in his first year. He is part of the 4 Seasons Club, Nerd Herd and Just Amazing Musicians (JAM) and has also helped the Lion Ambassadors at events such as New Student Orientation and Accepted Students Day.

The club he spends the most time with is the Student Government Association (SGA), which elected him to serve as its president this year.

“I became close friends with some of the people I met my first day on campus and they convinced me to join SGA,” Zimmerman said. “I tried it out and had a lot of fun. I also feel like we get a lot done. I kept getting more involved with SGA, starting as a senator and then becoming webmaster. After that, I was voted in as president.”

As SGA president, Zimmerman said he wants to see more student involvement and input into what happens on campus.

“Especially since we are a small campus, I want our students to be engaged and to experience the close-knit community we have here,” he said. “Often, it can be the same students involved and I would like to see that broaden to more of our student population.”

During this academic year, Zimmerman hopes to maintain all As in his classes and to obtain an internship in the information technology field next summer. After he graduates, he wants to work in cybersecurity, either for the government or a private business.