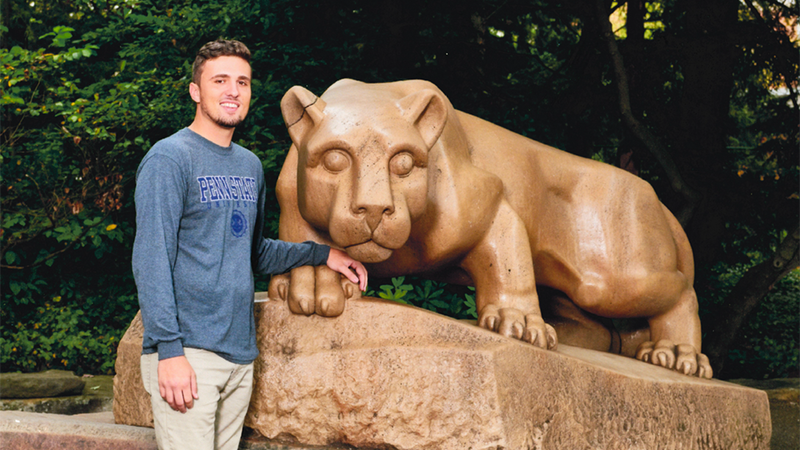 From start to finish

After transitioning to University Park, Sean-Paul Williamson didn’t think he’d be graduating from Penn State Wilkes-Barre; unexpected family circumstances brought him back to the local campus, where he will complete his degree in May.

After transitioning to University Park, Sean-Paul Williamson didn’t think he’d be graduating from Penn State Wilkes-Barre; unexpected family circumstances brought him back to the local campus, where he will complete his degree in May.

A graduate of G.A.R. Memorial High School, Williamson was unsure what he wanted to study when he began at Penn State Wilkes-Barre, changing his major several times.

But during his third year of school, while he was at University Park, his life—and plans—suddenly changed with the death of his father.

“My dad passed away during syllabus week and my grades slipped. I decided to come back home and be with my family and pick my grades back up,” Williamson said.

He also found that he preferred the smaller size of Penn State Wilkes-Barre and the campus’ wooded setting.

“You don’t get the same learning experience when there are 700 kids in a class. The smaller class sizes and the personalized one-on-one help you can get in a lot of the classes here really helped me a lot,” he said. “I also like the campus and the wooded area, where it’s quiet and nice to walk around. At Penn State Wilkes-Barre, you get a personalized experience with your professors and get to know a lot of people. They’re there to support you and it doesn’t feel like you’re just another student.”

Williamson’s interactions with his academic adviser, Gail Stevens, led him toward pursuing a degree in electrical engineering technology.

“I am beyond impressed with Sean-Paul and his perseverance through the tragedy of losing his dad so suddenly,” Stevens said. “His willingness to change his life to help his mom through a devastating situation shows a special young man. Nevertheless, he continued pursuing his ultimate goal of completing his degree, when he could have walked away and gone into the work force.”

“Ms. Stevens put me on the correct path, and I’m happy I’m where I’m at today,” Williamson said. “I’m thankful for the professors and support at Penn State Wilkes-Barre. Tim Sichler has also helped me out a lot and is my adviser now.”

Sichler, assistant teaching professor of electrical engineering technology, said, “Sean-Paul is a well-spoken student who asks relevant questions. He is diligent in learning new subject material and verifies its use when put into application.”

Williamson played on the Penn State Wilkes-Barre baseball team for three years and served as a captain. After graduation, he plans to look for employment in his field and is interested in working in space or military technology. He works at a local engineering design firm in mechanical electrical plumbing design, an internship that turned into a job, although he is currently laid off because of the pandemic.

“Sean-Paul is an exceptional young man who, as a student of mine, has a special place in my heart. I am more than proud of what he has done, his accomplishments and his perseverance. I know he’ll continue to be successful in life,” Stevens said.