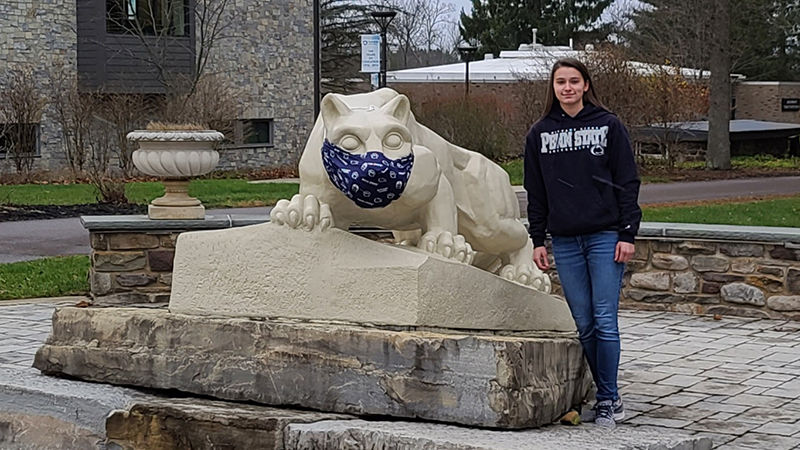 Ashley Tomeo always enjoyed “fixing stuff,” but things really connected for her during an information technology summer camp at Penn College of Technology. She is now a sophomore majoring in Information Sciences and Technology at Penn State Wilkes-Barre.

Ashley Tomeo always enjoyed “fixing stuff,” but things really connected for her during a summer camp about information technology.

Tomeo, a Laflin resident and Coughlin High School graduate, grew up with an interest in technology that led to her attending a camp at Penn College of Technology, a Penn State affiliate.

“I learned about application, design, cybersecurity and more. The camp really made it the deciding factor for me to study IT in college,” she said.

She is now a sophomore majoring in Information Sciences and Technology at Penn State Wilkes-Barre, which she chose in part because “the IST program has a little bit of everything in it.” She also liked the opportunity to go to college while staying at home.

Tomeo has already been putting her IT skills to use at the campus help desk.

“I wasn’t sure if I wanted to stay at Wilkes-Barre for four years or go to University Park,” she said. “I think the people at the Wilkes-Barre campus, especially Brian Reese, helped me decide to stay here. He has given me insight into a lot of things and has really helped me out since I met him at orientation.”

Reese, a systems administrator and lecturer in Information Sciences and Technology, said, “Ashley has been a dependable student with an eagerness to learn as much as possible about the information technology field. When discussing issues, she brings a different perspective to the table that allows for a more open-ended and deeper discussion. Ashley has a strong focus on becoming an information technology professional with a concentration in cybersecurity, and from what I have been able to observe, she’ll make a great member of any organization’s information technology department.”

Tomeo spoke highly of other faculty and staff at Penn State Wilkes-Barre, saying, “I already know so many faculty and staff in only my third semester. It’s great how welcoming and nice everybody is. Wherever you go on campus and whatever building you’re in, there are welcoming people.”

Ashley said she has especially benefited from classes with Ann Brennan, associate teaching professor of English. “Starting with my very first class with her during my first semester, Dr. Brennan made my college transition feel comfortable. I think she’s a great teacher and I learn a lot from her.”

Brennan said, “I’ve had the pleasure of working with Ashley in several courses. She is a dedicated student, a thoughtful listener, an insightful contributor and an open-minded thinker. Ashley is a team player who is always willing to provide an assist in the classroom, at the IT Help Desk, on the basketball court, across campus, and in the community.”

Last semester, Tomeo decided to try her hand at basketball and joined the women’s basketball team at Penn State Wilkes-Barre for a chance to play something new.

“I played softball in high school, so it was great experiencing another sport,” she said.

Off campus, she works in food service at Geisinger Wyoming Valley, a job she has held for more than two years.